Salomon makes industry leading products in trail running as it has a lot of credibility among freeriders. Cross-country skiing, snowboarding and outdoor in general come on top of that. Therefore it is sometimes forgotten where Salomon actually comes from. 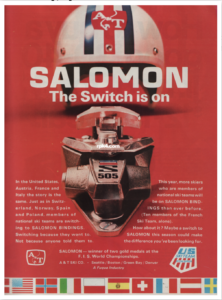 Georges Salomon developed the first “modern” ski binding in Annecy back in 1957. “Le Lift” consisted of a toe piece that could release the boot sideways: A revolution. Already in 1960 came the S505 on the market, the first binding with heel step-in.
From this to the current Steelhouse it is actually only a small step. In addition, Georges Salomon was soon able to successfully manufacture shoes compatible with his bindings and, a little later, skis.
It should also not be forgotten that Salomon built one of the first twin tip skis with the “1080” model in 1997. JP Auclair made his first mute grabs with these yellow classics. Since then, Salomon has continued to be very innovative in all areas: Bindings (e.g., the Shift), boots (the groundbreaking MTN Lab) and, of course, skis.